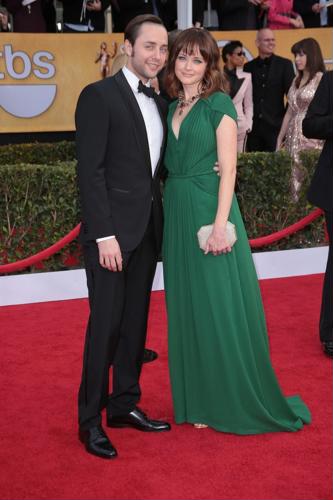 It's official: Alexis Bledel is engaged and she's got the rock to prove it. The "Gilmore Girls" star and her fiance, Vincent Kartheiser of "Mad Men," announced their engagement last month, and hit the red carpet premiere of her made-for-TV movie, "Remember Sunday," flaunting the sparkler on her finger. The octagonal diamond is set in a band with pave stones on the sides - a unique and elegant shape that rests perfectly on her lady-like finger.

The couple seemed to have met on the set of "Mad Men," as they started dating right around the time she made a guest appearance as a troubled young woman who arrived in character Pete's office in simply a pearl necklace and fur coat.

Kartheiser apparently picked out the vintage-inspired ring, but the pair will do the wedding planning together, Pop Sugar reports. Bledel told the news source at her film premiere that they have not quite started the process, but they certainly have plenty of time ahead of them.

According Us Weekly, their engagement is still taking some getting used to. They caught up with Kartheiser at the season 6 premiere of Mad Men in March and asked him about the big proposal.

Whether you're hoping for a vintage-cut engagement ring like Bledel or are more of a modern fashionista who wants a halo shape and cut, there's one tip to remember when you're newly engaged: Groom your nails. The TV starlet flaunts a dainty, ballerina-pink manicure that is the perfect complement to the gorgeous rock on her ring finger.

If you're curious what your dream engagement ring might look like on your finger, you can try affordable styles like the Cubic Zirconia Platinum Over Sterling Silver Octagon-Shaped Engagement Anniversary Ring and see if Bledel's unique ring would be a ring you could love too.