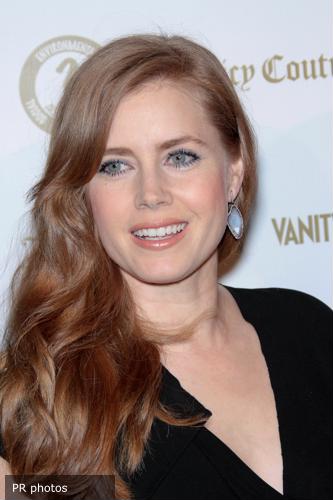 It's become abundantly clear that turquoise is making a comeback this summer, and Amy Adams' recent appearance at the Taormina Film Festival in Sicily, Italy, perfectly exemplified the trend. According to InStyle Magazine, the 38-year old star caught everyone's attention by pairing her turquoise cocktail ring and drop earrings with a ladylike white lace strapless Dolce & Gabbana dress. Along with a pair of creamsicle orange pumps, the blue accessories were a perfect minimalist complement without overwhelming her demure frock. Even her makeup was kept natural and soft, making the the jewelry stand out even more.

At the Mediterranean film festival, she was joined by co-stars Henry Cavil and Russell Crowe for a screening of their recent blockbuster hit "Man of Steel." The Huffington Post reported that sales for the flick jumped far above box office expectations in a single weekend. The Warner Bros. film about Superman earned $113 million in its opening weekend alone, according to studio estimates. Meanwhile, The Huffington Post revealed that original predictions for "Man of Steel" ranged between $75 million and $130 million.

Following in the footsteps of both Margot Kidder and Kate Bosworth, Adams plays the iconic Lois Lane.

"I've always really loved action films, but I don't see myself as a superhero girl, so my Lois is a mere mortal - full of imperfections," she said. "She's someone I identify with. So this was an opportunity to be in a genre film without having to train - which was a positive thing."

She noted that director Zack Snyder wanted her to give the character as much realness as possible. He even asked that she maintain her natural color to keep her portrayal of the reporter genuine.

"I think that he was interested in making his own stamp and not forcing some idea of who Lois was on the character and just letting her exist in this world of the film."

A natural choice for the role, Amy Adams is one of Hollywood's most elegant and multi-dimensional actresses. And not only did "Man of Steel" exceed expectations, but her choice of turquoise at the film festival also caught attendees off guard. It's likely that more starlets will follow suit as the summer progresses.

This unique stone has been appreciated for centuries not only for its eye-catching hue, but also for its supposed power in many ancient cultures. Now, turquoise, which has been seen as a symbol of wealth, still maintains a certain cool elegance in a chunky cuff or a delicate pendant.

Whether a deep aquamarine or a paler sky blue, you can incorporate this stone into any outfit and make a seamless transition with denim during the day to a cocktail dress at night. The Turquoise-Colored Marquise-Shaped Stingray and Mother-of-Pearl Drop Pierced Earrings in Silvertone, which have a delicate leaf shape and pebbled texture. If you'd rather sport this hue around your neck, the Related Items