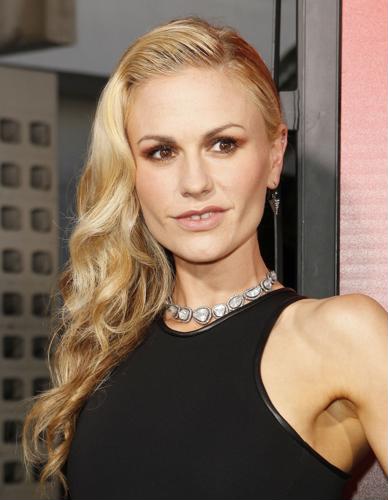 Anna Paquin was just one of the many "True Blood" stars who stunned on the red carpet this week. The actress, who plays protagonist Sookie Stackhouse in the HBO series, wore an all-black ensemble with striking accessories, including fang-shaped earrings and a Jacob & Co. diamond necklace to complete the look. Her signature smile was in full force at the "True Blood" premiere, perhaps because her offscreen love and coworker on the set, Stephen Moyer, was also present at the event.

Paquin's look was an all-out hit, from her elegant accessories to her innovative LBD to the perfect makeup she chose to complete the ensemble. She showed that there's nothing boring about a black dress, and if you're worried about blending in, you can opt for something different like Paquin's leather skirt bottom, her voluminous curls and eye-catching accessories.

Aside from the show's premiere, Paquin's been busy in her personal life, too. She's been raising her now nine-month-old twins, and has done a stellar job keeping information about them private, according to CBS News. Not until Tuesday when speaking with E! News did Paquin?'s husband, Moyer, reveal the names of their boy and girl: Charlie and Poppy.

The sweet starlet discussed Father's Day activities with E!, and how they planned on spending the day with their two little ones.

"I can't tell you because that would ruin the surprise," she said of exactly what they'd be doing that special day. "I don't know about [it being a] big surprise, but yes, there are plans."

You can catch the season premiere of "True Blood" on HBO June 16, and you can pick up accessories similar to Paquin's by finding a special piece like the Midnight Blue Sapphire & Diamond Accent Pendant-Necklace. Whether you wait for someone to purchase it for you or buy the treat for yourself is up to you!