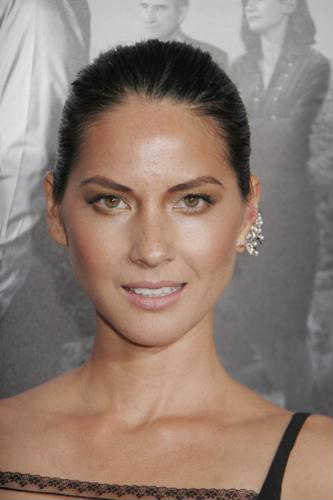 When it comes to rocking the best trends on and off the red carpet, actress Olivia Munn usually stands out for her ability to mix high end ensembles with rocker-chic accessories. Her most recent appearance at the Hollywood season 2 premiere of her HBO show, "The Newsroom," was no different, but one piece of jewelry did leave us guessing.

According to People magazine, the brunette beauty dazzled in a sleek Thakoon satin sheath that boasted a thin horizontal strip of lace fabric at the neckline as well as a double slit - showing off her toned legs. While the eye-catching frock might have been interesting enough for fashion bloggers to dissect, Munn played up her fashion risk-taking altitude even further by also donning a single pearl statement cuff on her left ear.

That's right, this style maven opted to forgo symmetry and instead shine with just one impressive earring. Munn wore no other accessories or jewelry and kept her clutch and shoes simple as well. You could take a tip from Munn and opt to enhance your favorite LBD by donning a similar cuff or ear pin like the 1/2 TCW Round Cubic Zirconia Sterling Silver Ear Pins® Earrings. Even though the pins come in a set of two, you can leave one at home to dazzle just like Munn.

The actress, who plays an economist and news anchor on the hit HBO series, recently discussed the ways in which she got into character for the role.

"When the show first came out, a lot of people were wondering about Sloan and who she was based on," Munn told The Hollywood Reporter. "... [A]s I started getting asked that more and more, I started thinking, 'Well, the question really isn't who is it based on, it's who inspired me as a journalist and why did I want to go into journalism.'"

No matter what role Munn tackles, one thing's for sure, we're always excited to see what she'll wear on the red carpet.