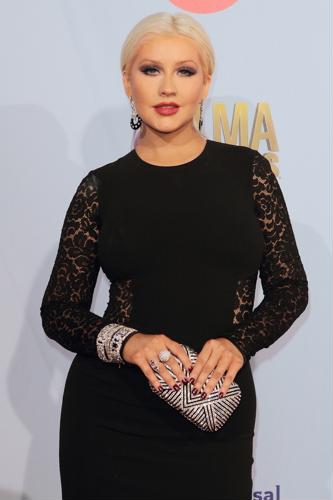 Diamonds really are a girl's best friend, at least according to Christina Aguilera. The powerful pop singer and Time 100 honoree showed up at the New York City Gala in a Victoria Beckham fitted black gown with a keyhole cut-out, flaunting her slimmer physique. Aside from dressing the look up with her white-hot blonde locks and bright red lips, Aguilera decked herself out in Lorraine Schwartz diamonds that could be seen sparkling from miles away. A dazzling necklace, woven diamond bracelet and multiple rings kicked her ensemble up a notch and made her a star of the red carpet.

Time magazine honors 100 influential people each year, often giving someone with similar star power the chance to speak out about why this person deserves the recognition. Celine Dion offered her own perspective as to why Aguilera is such an amazing artist.

"The first time I heard Christina Aguilera sing, I was totally blown away," Dion told the magazine. " ... Without a doubt, she's one of the most talented artists the world has ever seen and heard, and I think she's going to continue to amaze us for many, many years to come."

At the event, it appeared that the former Mickey Mouse Club star found a new friend: Lena Dunham. The two were spotted embracing and laughing on the red carpet, with Dunham towering over the tiny blonde singer.

Aguilera has had a busy couple of years, trying to balance her spot on the NBC show "The Voice" (which she passed to Shakira for this season) and create new music for upcoming concert tours. She seems to be doing just fine, as she has purchased a $10 million Beverly Hills estate that was previously held by Detroit Pistons owner Tom Gores, according to Michigan Live.

If you want to show off one of your latest accomplishments with stunning, sparkly attire, try wearing an outfit with accessories like the Diamond Pavé Cluster 10k Yellow Gold Drop Pendant And Chain.