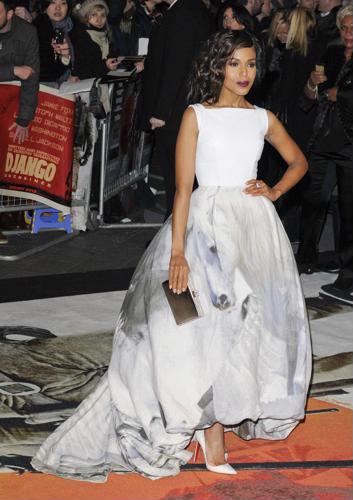 Kerry Washington looked like a perfectly wrapped present at the Elle & Tod's magazine cover party, where she was being honored for her June cover photo. Wearing a beige Lanvin dress, Christian Louboutin shoes and tasteful jewelry, including Joan Hornig earrings and a Movado watch, Washington was clearly the star of the party, even when standing next to legendary supermodel Iman.

The "Django Unchained" and "Scandal" actress is having a phenomenal year, and she knows it, according to her interview with Elle.

"I'm the luckiest broad in Hollywood now," Washington told the magazine. "To be the lead actor on 'Scandal' and to be in the highest-earning Tarantino movie - I don't get to ask for more."

It's hard to tell which came first, her superstardom for her film and TV roles or her impeccable sense of style, which she's lately been parading on the red carpet for film premieres, awards ceremonies and lavish galas. Some of her most memorable ensembles include her black-and-yellow Michael Kors "mullet" dress and simple gold earrings, her all-over floral ensemble at the 2013 Independent Spirit Awards, and her horse-printed white Giles gown that she wore to the "Django Unchained" London premiere.

Whether she's wearing gowns for a black-tie affair or chic, cool clothing on the cover of Elle magazine, it's no question that her knack for accessorizing and ability to make virtually anything look polished comes easy. It might help that she actually enjoys the process of getting ready, she told Elle in her interview.

If you're looking to create an artistic ensemble like Washington, try one of these unique pieces to add to your collection: Green Genuine Jade 14k Yellow Gold Macaroni-Link Bracelet, or the "color of the year" Round Genuine Emerald With Diamond Accents 10k Yellow Gold Ring.