Emma Stone steals the show at 'The Croods' premiere 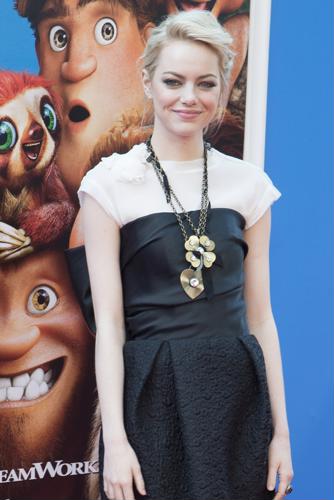 Although the family film "The Croods" might be animated, the stars behind each character - and their flawless sense of style - are very real. Actress Emma Stone offered her vocal talents for Eep Crood, the oldest daughter of the animated cave people family. In real life, however, Stone strolled across the red carpet like a modern-day Audrey Hepburn, wearing a knee-length black-and-white dress, nude pumps and a layered, chain necklace with chunky flower and heart pendants. The girly accessory added a youthful flair to her classic outfit - perfect for the premiere of her kid-friendly film.

At the premiere, Stone was joined by costar Ryan Reynolds, who looked like the epitome of a gentleman in navy pinstripe pants, blazer and deep-collared sweater. While he looked handsome as usual, his stunning wife stole the show simply as a guest of the premiere. Blake Lively never fails to disappoint on the red carpet, and for the New York City screening of "The Croods," she kept up her stylish reputation with a maroon A-line, sleeved mini with white trim and white pumps to match.

Stone has recently shot photo and video for Revlon's Nearly Naked makeup line, and revealed how she stays positive and happy in such a cutthroat industry.

"The secret to happiness ... is living the life that you want to live," Stone told People. "Not based on anyone else's judgment of your life or your judgment of theirs. Because I think a lot of people compare their insides to other people's outsides."

Also in the ad, Stone shares how important it is to be funny, and how it makes her feel beautiful. The actress continues to blow up in the style scene and film industry, but she certainly got her recognition from the beginning because of her hilarious wit in films like "Superbad."

If you want to follow an influential style maven like Stone, you can pick up a layered chain necklace like the Multi-Layered Cable Chain Necklace In Tutone and hang your own favorite pendants from it.