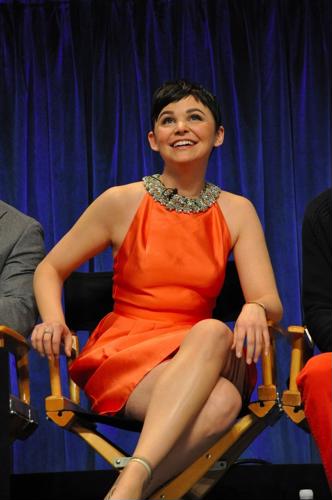 Ginnifer Goodwin is known for rocking the red carpet every time she attends an event, and this was no different when she arrived at PaleyFest in Los Angeles. According to People magazine, the stunning brunette wowed in a shimmering tangerine dress, which was complete with a jeweled neckline. She finished the look with white platform sandals and a simple bracelet. The event honored her hit ABC show, "Once Upon a Time."

During the event, the stars of the show described what fans can expect and their feelings on certain situations. Goodwin took the time to reflect on how her character, Snow White, is doing on the show, and how it hasn't been the easiest of rides for the star.

"What she is going through is going to shake her self-identity, her self-definition ... she doesn't know who she is. I think that actually opens a lot up for her. She can get in touch with a more evolved way of protecting herself and her family through what's about to happen," Goodwin said of her character according to People.

Goodwin wasn't the only glamorous star from the hit series, as Jennifer Morrison also looked great. According to the Daily Mail, Morrison donned a blue pantsuit, which she paired with hoop earrings and her hair in a stylish ponytail. The only problem with her ensemble was that her trousers were just a little bit too long, so the star struggled, nearly tripping as she walked the red carpet.

Those who want to emulate Goodwin's style can do so by purchasing affordable jewelry such as the 6 TCW Princess-Cut Cubic Zirconia Silvertone Metal Double-Row Tennis Bracelet for much less.