Gwyneth Paltrow is chicer than ever 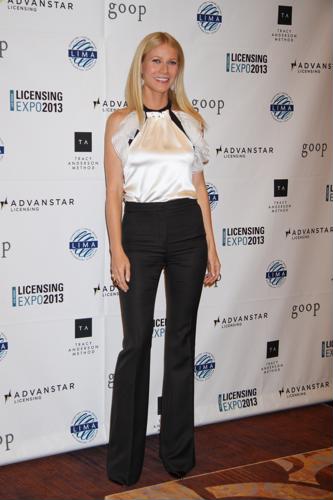 While some people best remember actress Gwyneth Paltrow for the princess pink ball gown she wore during the 1999 Oscars at which she won Best Actress in a Leading Role for her part in the film "Shakespeare in Love," the over-40 mother of two seems to be growing even more fashionable with age. Case in point -  she rocked the red carpet during her recent appearance at the Licensing Expo in Las Vegas.

People magazine reports the chic and fabulous actress, author and singer turned heads in a black and white ensemble created by famed designer Prabal Gurung. Paltrow strutted her lean frame around in the black, high-waist flared pants and a more feminine white blouse with ruffle detailing on the sides.

Though the outfit was enough to draw serious attention, Paltrow, who was the keynote speaker at the event, added even more drama to her ensemble by way of gorgeous stone drop earrings. The major bling - which boasted an emerald stone at top, a darker brown stone in the middle and finished with huge light pink crystals that fell near her chin, certainly added a personal touch to the look.

Even though you might not have Paltrow's bank account, or the ability to buy anything on her website GOOP for that matter, you can still steal her fabulous style by purchasing stand-out jewelry the like 6.70 CT TW Amethyst And Smokey Topaz Drop Pierced Earrings In Sterling Silver for much less.