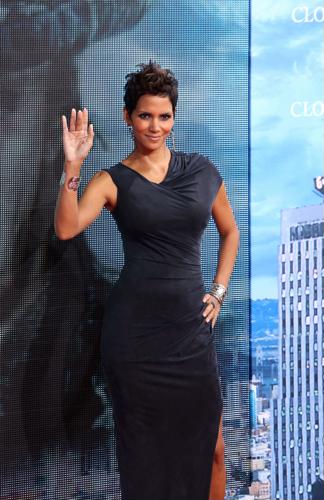 Halle Berry looked lovely once again when she arrived at the premiere of her latest film Cloud Atlas in Germany. According to Us Weekly, the actress donned a charcoal gray tight-fitting dress with silver strappy heels, bangles and chandelier earrings.

Berry's short hair was spiked up and styled perfectly. The brunette beauty recently talked about her short hair and explained that it does not define her, but she wanted to be something different, People Magazine reports.

"I personally fought against that stereotype when I first started acting," Berry told the news source. "I would go on acting auditions, and every black girl would have this long, curly hair, whether it was real or not. And I would go to these auditions and come back with nothing. So I had to somehow be different."

She decided to chop it off in 1989, and her manager was far from pleased, saying she would never work in this business. Two weeks later, she had her first TV job, the media outlet reports.

Fans of Berry who want to dress just like her can opt for costume jewelry such as the Black Ruthenium Finish Grey Crystal Curved Linear Drop Pierced Earrings for much less.