Isla Fisher steals the spotlight at 'The Great Gatsby' luncheon 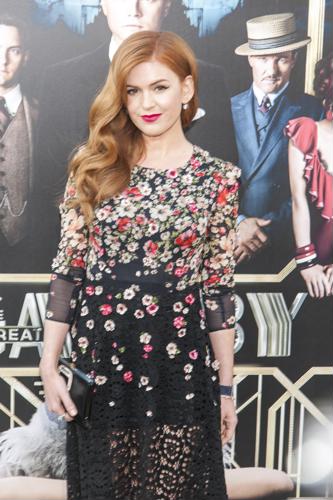 Leonardo DiCaprio and Carey Mulligan might have the leading roles in the film adaptation of "The Great Gatsby," but Isla Fisher has been dominating the red carpet over the past few weeks. At a luncheon to promote the film, she embraced the tuxedo stripe trend with relaxed white separates and metallic pointy-toe stilettos, and accessorized with a long, crystal-encrusted chain necklace and matching platinum bracelet. The tiny starlet looked like a cool style icon at the New York Public Library, where the star-studded event took place.

Her jewels were designed by Van Cleef & Arpels, a favorite among celebrities who calls on feminine inspiration like butterflies and flowers. Fisher tends to follow her own path when it comes to fashion, which was also apparent at the official New York City premiere of the film. She wore a floral Dolce & Gabbana gown with three-quarter sleeves and a sheer lace skirt, which might have gotten some critiques from the fashion realm, but the red-headed Hollywood celeb managed to pull it off.

The actress had to gain some weight to fully embrace Myrtle, her character, but that was her own decision! She told E! Online that no one told her it was required.

"They didn't tell me to put on weight," Fisher told the news source. "I just knew the character was described as buxom, so I wanted to do the book justice."

She also told Easy Living Magazine that breastfeeding made it easy for her to put on some pounds - as well as eating cupcakes.

If your admiration for the adorable and skilled Hollywood actress inspires you to try mimicking her style, then pick up a long chain accessory like the Round Simulated Pearl Silvertone Metal Multi-Chain Necklace, and pair it with your trendiest ensemble.