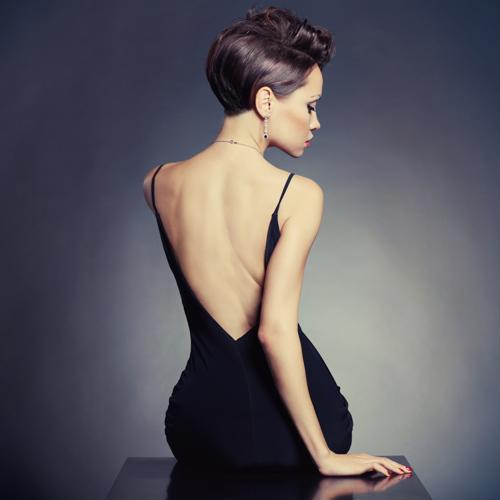 Lady Gaga recently announced her wedding dress plans to the public, revealing that Donatella Versace will be the designer and white will not be her top choice in color. Instead, the boundary-pushing popstar wants a black and gold silk dress. According to Gigwise, the head-turning design will also include a diamond embroidered bodice and a detachable skirt and train.

Ladies in black
While Gaga's the most recent celebrity to turn heads with her dress color choice, she's not the first. As nontraditional as it may seem, the color black has been a handful of stars' top picks for the wedding gown of their dreams, and the trend is even extending beyond Hollywood.

"There has been a growing interest in black wedding dresses," Tova Marc, head designer for Wedding Dress Fantasy, told Shine at Yahoo. "They are tired of the same old white and ivory."

Vera Wang's 2011 collection was one of the first major signs that this trend was not just a fluke. The top designer created 15 different looks for the runway, and ever since, more people have scrapped the idea that black is for funerals.

So, who's worn black? And did they pull it off? Here are a few prominent names that fearlessly went where no traditional brides have gone before.

Ellen Pompeo
The star of Grey's Anatomy, Ellen Pompeo, wed music producer Chris Ivery in an understated ceremony at New York City Hall with only one guest: Mayor Michael Bloomberg. While the marriage was simple, her dress was not - she wore a black dress by Yves Saint Laurent, which she had bought while in Paris the summer before her November wedding, according to Wetpaint. The pair have been historically low-key about their relationship and didn't make elaborate honeymoon plans after the wedding.

Sarah Jessica Parker
As the trendsetter of all style mavens, it's no surprise that Sarah Jessica Parker is one of the daring few to don an ebony dress on her wedding day. The former "Sex & the City" star and fashion icon might have even started the trend, at least among today's generation of brides, as she married Matthew Broderick in all-black back in 1997. However, her feelings toward white seemed to have changed over the years, according to her interview with Harper's Bazaar in 2009.

"White it up," Parker told the magazine, on what she'd do if she renewed her vows. "I'd wear a beautiful, proper wedding dress, like I should have worn on the day."

Accessorizing with black
If Parker's feelings of regret don't scare you away from the bold trend, then the next step is to decide how you'll complement your black dress with the right jewels. Because white and black are the most universal palettes to work with, your options are virtually unlimited. For a tasteful look, make sure to stay with one color, whether it be white crystal, gold jewelry or emerald, which is a hue that's currently making waves in the fashion realm.

If you're already going bold with black, why not pick up another trend and try emerald? You can try tasteful studs or a necklace and earring set, such as the Round Simulated Birthstone Sterling Silver Stud Earrings in emerald, or the Round Simulated Birthstone 10k Yellow Gold Cable-Chain Necklace And Drop Earrings Set in the same eye-popping shade.