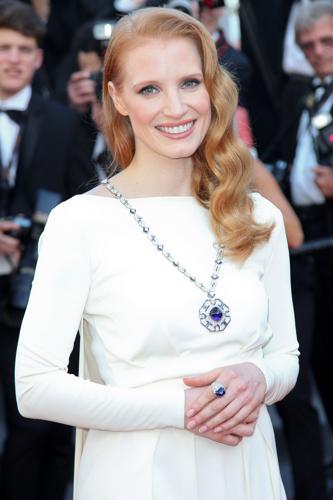 Not everyone can wear Elizabeth Taylor's immaculate jewels, but apparently, Jessica Chastain has proven her worth. As an homage to the original "Cleopatra" film, Chastain donned the gorgeous Bulgari sapphire-and-diamond pendant "sautoir" (long necklace) that Richard Burton gave Taylor for her 40th birthday, according to People magazine. These jewels, which were bought back by Bulgari from Taylor's 2011 auction, are almost never loaned to celebrities, but this was a particularly special occasion. The Cannes Film Festival screened the 1963 classic film in honor of its 50th anniversary, and Chastain was the lady to introduce the event.

To ensure all eyes stayed glued on the dazzling statement piece, Chastain wore a simple, white floor-length gown with a train, which complemented her fiery red locks. According to the New York Daily News, Bulgari officials kept a close eye on Chastain during the festival, just to make sure every stone was safe and remained in place.

"They are very discreet," Chastain told the news source. "I feel very safe. Every once in a while I look around and see there are people looking out to make sure I don't lose anything."

The iconic Taylor had a deep impact on Chastain's development as an actress, especially after she read the book, "Furious Love," an account of Burton's and Taylor's love letters. The chance to represent her was a complete honor, Chastain told the news outlet, and wearing her jewelry made her feel even more connected to one of her role models.

A 65-carat diamond necklace may not be within your budget, but that doesn't mean you can't channel the late Taylor and find some dazzling jewels of your own. Wow your friends with a gorgeously cut diamond that will sparkle in the sun, like the Pear Cut Genuine Aquamarine Diamond Accent Platinum Over Sterling Silver Drop Pendant And Chain.