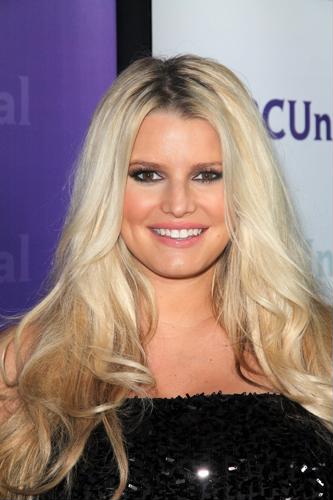 Jessica Simpson recently stopped by Jimmy Kimmel Live and the expectant mother looked nothing short of fantastic. The "Fashion Star" judge wowed in a black dress that showed off her growing baby bump, and she matched it with dangling earrings and a massive cocktail ring. According to Entertainment Weekly, while on the show, she revealed a little too much, as she was talking about how different this pregnancy is to the one with her 10-month-old daughter, Maxwell.

"It's a total[ly] different pregnancy. I just feel awful. I've been vomiting. The crazy thing is I never knew that a wiener could actually make me nauseous," Simpson told Kimmel by accident and then added. "Oh shoot! Well, I guess I just told the world that I'm having a boy."

Everyone burst into laughter, including Kimmel, who made a few jokes before congratulating the singer and fashion designer. Simpson, who has been engaged to the father of her children, former NFL player Eric Johnson, since before Maxwell was born, has yet to finalize their wedding plans. She keeps postponing the nuptials until after her pregnancies, but she does plan on tying the knot after her son is born, the media outlet reports.

"I keep planning on getting married but I keep getting knocked up," Simpson told Kimmel. "It's just one of those things. ...Maybe I should just completely reverse and just stop having sex all together until Eric and I actually say 'I do.'"

Those who want to dress just like Simpson can do so without breaking the bank by purchasing costume jewelry such as the 27.10 TCW Emerald-Cut Cubic Zirconia Platinum Over Sterling Silver Engagement/Anniversary Ring for much less.