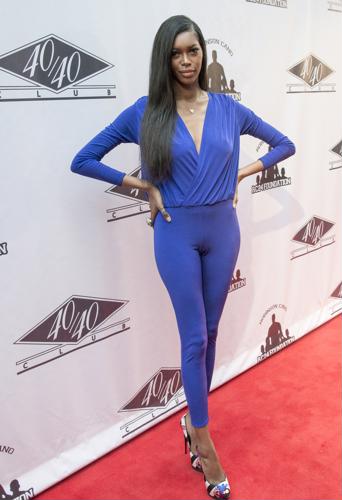 Model Jessica White certainly showed off her fabulous figure while attending the recent Super Heroes Fundraiser and Domino Tournament in New York City wearing a skin-tight, deep-purple jumpsuit. White dazzled in her sleek design that not only stood out thanks to the stunning color, but was made even sassier by way of her gold accessories.

The beautiful model looked a bit like a super hero herself, which was fitting for the event that was also attended by other big name stars like Jay-Z and Robinson Cano. Cano hosted the fundraiser. White accentuated the lovely purple ensemble with a gorgeous gold cocktail ring and a simple gold chain with a heart pendant. You can accessorize a bold top or even a jumpsuit similar to White's by rocking a massive cocktail ring like the Freeform Ring In Rose Gold-Plated to add some bling to your fingers.

Though White stole the attention at the recent fundraiser, the true stars of the event were the 40 children in attendance from Cano's foundation. According to MLB.com, the Yankees second baseman ate pizza and played games with the youngsters he calls his "super heroes."

"The more money you get, the more you can do," Cano said on the red carpet, according to the news outlet. "Even if you have money or don't have money, if you've got good people around you, you can do a lot of good things."