Kate Beckinsale treks into the spotlight at Hollywood film premiere 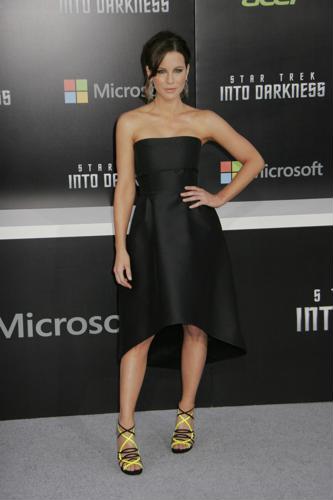 Sometimes, all you need is one pop of color, and Kate Beckinsale proved that at the premiere of "Star Trek Into Darkness" in Hollywood on Tuesday. Wearing all black except for the neon green straps of her Jimmy Choo heels, the British starlet showed off her style prowess, as well as her fit physique. While her stiletto sandals were a bold statement, she kept the rest of her accessories minimal, except for the dramatic chandelier earrings she wore with a loose updo.

The beautiful starlet is often acknowledged for her stylish eye, whether she's dressed formally like she was for her Mother's Day outing with her daughter Lily and ex-husband Michael Sheen, or casually, like she did for her exit from the London Heathrow Airport last week. According to E! Online, her signature look tends to involve solids and prints in an effortlessly chic way. Though she keeps her jewels minimal for the most part, she knows how to dress up an outfit with just one statement accessory, whether it's dramatic dangle earrings or a bright, bejeweled necklace.

Looking good and working hard can be tough, but Beckinsale makes it happen day in and day out. She's been busy filming a handful of movies, including "The Trials of Cate McCall," which is due to come out later this year, according to the Daily Mail. The actress will star as a former lawyer opposite Nick Nolte in the suspenseful drama, which means she'll get a chance to show off her skilled acting chops and break away from the typical romantic comedy roles.

If you're looking for a role model style icon, Beckinsale may be your go-to girl. Start emulating her style with a versatile pair of statement earrings, like the Round White And Black Crystal Silvertone Metal Chandelier-Style Drop Earrings, and then start mixing and matching your prints with confidence!