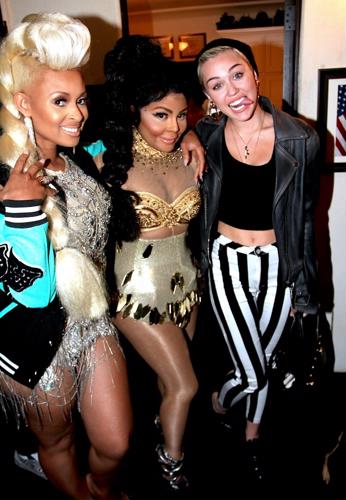 Miley Cyrus certainly knows how to turn heads, either with her bold fashion attire or her bizarre rants on social media outlets. Lately, she's been drawing attention for both - whether it's good or bad publicity is still to be determined. The former Disney star arrived at the grand opening of Seacrest Studios in a black-and-white striped strapless jumpsuit, which garnered mixed reviews from the style experts, but her simple accessories helped her win more points.

She paired her daring ensemble with a tasteful gold choker and chain-link bracelets. With such an attention-grabbing outfit, it's no surprise she went with a more subtle look with her jewelry accessories. Still, Cyrus completed the look with bright red lips, showing her fearlessness in the style department. That's not where her brave side ends, however, as she just recently gained a lot of attention for a video she released of herself "twerking it."

The video shows the pop star in a one-piece unicorn outfit dancing to the song "Wop" by J. Dash, in a style she has referred to as "twerk."

"I'm getting so many people writing to me about it," Cyrus told Seacrest on KISS FM's "On Air with Ryan Seacrest." "It's weird I've twerked for 6 million people. You can't really explain [it]. It's something that comes naturally. It's a lot of booty action."

According to the New York Daily News, Miley Cyrus was thrilled with the feedback she received from the video. Strangely enough, it has earned more positive reviews from fans and viewers than virtually any other work she's put out there.

While you might not be courageous enough to step out in a jumpsuit like Cyrus, you can wear her elegant jewelry and feel like a class act. Try the Goldtone Metal 6mm Omega-Link Choker Necklace with matching bracelets, and if you're feeling daring, go ahead and pair it with that funky outfit you've been eyeing.