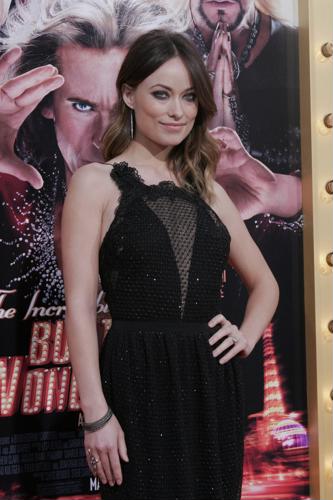 Olivia Wilde might have been dressed in somber tones at the recent DVF Awards, but her mood was nothing short of ecstatic to be attending the feel-good, female-centric event. Headed by designer Diane Von Furstenberg, the ceremony honors women who help other women, and this year included supermodel Natalia Vodianova, who built 100 playgrounds for children in Russia, and Robin Roberts, a cancer survivor and "Good Morning America" anchor, the Daily Mail reports.

Of Wilde's entire black ensemble, the most standout item was the massive black medallion worn around her neck. The vintage pendant necklace came from the House of Lavande collection and brought her animal-embossed blazer and skinnies to a whole new level of chic.

Wilde was one of a handful of presenters at the awards event, and tweeted about her excitement on the day leading up to the show, which was held at the U.N.

"Heading to the U.N. for the first time to present at the DVF awards. Psyched (understatement)," she tweeted. "Gloria Steinem will not escape my bear hug."

British singer Paloma Faith was another attendee of the fourth annual DVF ceremony, and told the crowd at the event that women's unity is of the utmost importance in today's world.

"It's important that we as women get together and celebrate each other rather than what sometimes happens, or what is sometimes encouraged in the media - to be against each other," Faith said, as reported by Nick Remsen of Style.com.

One thing that was missing from Wilde's attire was her beautiful engagement ring from fiance Jason Sudeikis. According to her tweets, the piece is being resized, although it would have been the perfect complement to her eye-catching necklace.

If you're looking for a statement piece to add drama to your look, consider a statement pendant like Olivia Wilde. One bold option is the Cushion-Cut Genuine Smoky Quartz 14k Yellow Gold-Plated Slide Pendant/Pearl Enhancer, which will certainly enhance whichever ensemble you choose.