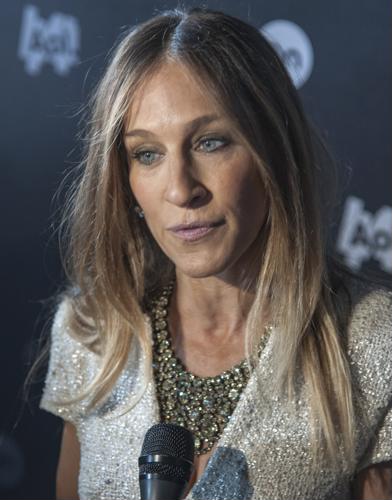 Like a bottle of fine wine, Sarah Jessica Parker's style just gets better with time. She recently hit the stage at an AOL NewFront event in a sparkling white shift dress by L'Agence, pointy-toe Manolo Blahnik heels and a gorgeous, bejeweled statement necklace. Her snakeskin cross-body bag and pale green blazer pulled the whole look together, showing that some people's fashion sense is timeless.

According to Marie Claire UK, the former "Sex and the City" starlet officially confirmed she'd be a part of the AOL web series, and will produce a documentary called "City.Ballet," which will chronicle the New York City Ballet company.

"It's not about the drama and the backstabbing and hysteria and catfights that people tend to think exists in the world," Parker told E! Online. "The Ballet is at its finest point in years. It's a company that arguably has the greatest dancers in the world, and I wondered, 'How can I introduce this company to a larger audience so that when people come to New York, they not only see a Broadway show, but they go 20 blocks north and buy a ticket to the ballet?'"

The svelte actress has been on the New York City Ballet board for a few years, and has shown her support in a number of ways, such as last year's collaboration with the dance company and style maven Valentino. The renowned designer created the costumes for the NYC Ballet at one of the major fall galas, according to Vanity Fair.

Whether you're inspired by ballet like Parker or appreciate polished and proper style, statement necklaces are a spectacular way of bringing this look into your own wardrobe. If you want color and sparkles like the stylish celebrity's, then try the Multi-Colored Crystal Silvertone Metal Antique-Finish Bib Necklace And Earrings Set, and wear the pieces separately to switch up your ensembles.