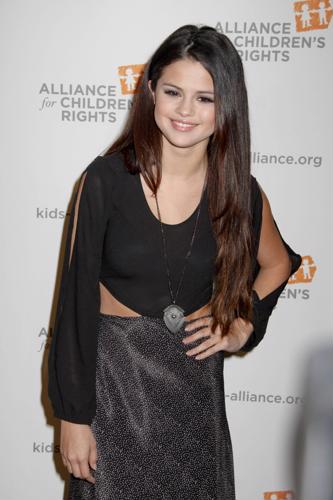 Between promoting her new film "Spring Breakers," narrating part of the moving documentary "Girl Rising" and supporting organizations like the Alliance for Children's Rights, Selena Gomez barely has time to sleep, let alone stay up-to-date with style trends. The 20-year-old actress somehow still manages to put her most fashionable foot forward, arriving at the Alliance for Children's Rights dinner in Beverly Hills Thursday night in a goth-meets-chic maxi dress with midriff-baring cutouts and a long pendant necklace. Paired with simple black stud earrings, Selena brought a style all her own to the ensemble.

While she may appear flawless on the outside, she doesn't always feel that way while strolling across the red carpet. The young starlet is the cover girl of the April issue of Harper's Bazaar, and revealed some endearing insight about her own feelings toward her style.

"I do not give a damn what I look like, I really don't," she said in the exclusive magazine interview. She counted the six flannel shirts she owns - wearing one during the time of the interview. "I look like this all the time. When I actually look presentable, it's for an awards show ... Of course, when I'm on red carpets, I'm nervous, sweaty and weird."

Now that Selena's "Spring Breakers" promotion tour is over, she's back in the States to get to work on her new album, which is scheduled to come out this spring.

The altruistic actress devotes much of her time supporting charities and organizations geared toward empowering women and children across the globe. She joined Hollywood icons Meryl Streep, Anne Hathaway, Kerry Washington and Freida Pinto to narrate the documentary "Girl Rising," which just premiered this week.

If you're looking to channel Selena's edgy look, you can pick up a pendant necklace like the Black Circle-Shaped Stingray And Mother-Of-Pearl Pendant In Silvertone, complemented with simple stud earrings.