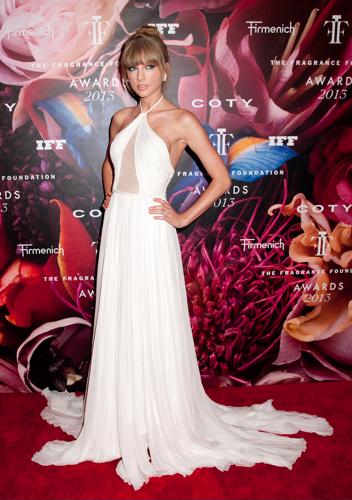 If you need advice on hair, style, makeup or jewels, Taylor Swift proved this week that she's your go-to gal. The singer and actress attended the Fragrance Foundation Awards at Alice Tully Hall in New York City's Lincoln Center looking like an angel, wearing a flowing white gown by Emilio Pucci, Rene Caovilla shoes (which you can't see) a chic updo and Lorraine Schwartz accessories. Good thing she looked absolutely flawless, too, because her Wonderstruck Enchanted Perfume won the Celebrity Fragrance of the Year award, according to The Huffington Post.

Even though she keeps climbing up the ladder in just about every category she falls in - country, pop, fashion, retail - she still manages to reach her fans in an intimate way. Even in a stadium that seats tens of thousands of people.

"Everyone who comes to these shows seems so engaged," Swift told The Washington Post. "They come to the show. They know the words. I'm singing the words. We're singing them at the same time, and therein lies the connection. It goes beyond what size the venue is."

Though she's been busy, even making TV appearances on hit shows like FOX's "New Girl," her heart lies with songwriting, guitar playing and performing. Her fans must be happy to hear that she's not steering away from the music scene anytime soon, and that's a whole lot of people - according to the news source, she has sold more than Princess-Cut Channel-Set Simulated Birthstone Sterling Silver Huggie-Hoop Earrings, to really make a statement.