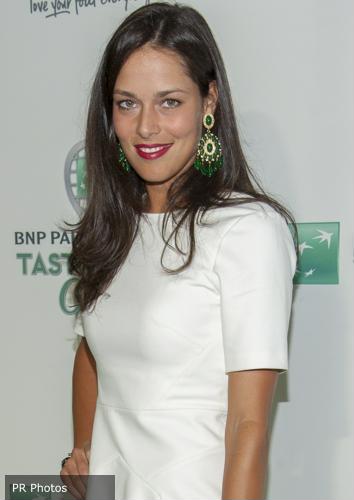 What's a pro tennis player's favorite color? Unsurprisingly, it's green - as Ana Ivanovic demonstrated at the recent 14th Annual BNP Paribas Taste of Tennis. The event, which took place at the W Hotel in New York, was hosted by Olympic gold medalist Serena Williams and featured dishes from 28 internationally renowned chefs. Ana Ivanovic donned a demure short-sleeved white dress for the event, which she accented with intricate forest green beaded earrings. Red lipstick provided the only other pop of color in Ivanovic's look.

Despite winning nine of the final 11 games at the Southern California Open this summer, Ivanovic admitted the first round of matches was tough.

"But I was really happy with my performance," she said, according to USA Today. "This kind of win obviously means a lot to me."

She noted that she's been working on consistency and confidence. "I think it plays a big role. I felt like my game has been there at times but not my confidence."

Her jewelry says otherwise. Want to try the bold look yourself? Feel free to copy her flawless fashion statement and incorporate exotic chandeliers in jewel tones next time you're trying to jazz up white garments.