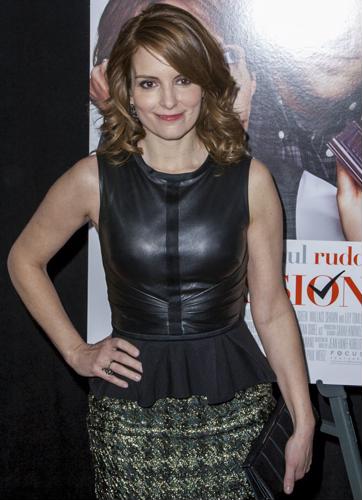 Tina Fey looked nothing short of fabulous when she arrived on the red carpet of her latest film premiere, "Admission." According to People magazine, the comedian wowed in a J. Mendel leather peplum shirt, which she matched with a tweed skirt by the designer and drop earrings.

Even though Fey has a massive fan base from her movies and TV career, one person who doesn't find her funny is country crooner Taylor Swift. The blonde singer recently responded to a quip Fey and Amy Poehler made about the singer's public love life while they were co-hosting the 70th Annual Golden Globes. Fey and Poehler joked that the serial dater should stay away from Michael J. Fox's young son, who was handing out awards that night.

"Katie Couric is one of my favorite people," Swift told Vanity Fair backhandedly referring to the comments made by Fey and Poehler. "Because she said to me she had heard a quote that she loved that said, 'There's a special place in hell for women who don't help other women.'"

At the recent premiere, Fey made a point to respond to the reaction Swift had to her quip while hosting.

"It was just a joke, and I think it was actually a very benign joke," Fey told Us Weekly at the event.

Fey's partner-in-crime had a similar response to Swift's comment, but she took a more lighthearted tone.

"Aw, I feel bad if she was upset," the "Parks and Recreation" actress told The Hollywood Reporter of Swift. "I am a feminist and she is a young and talented girl. That being said, I do agree I am going to hell. But for other reasons. Mostly boring tax stuff."

Those who want to emulate Fey's style can do so by purchasing affordable jewelry such as the Marquise-Shaped Genuine Onyx Cubic Zirconia Accent 18k Gold-Plated Drop Earrings for much less.