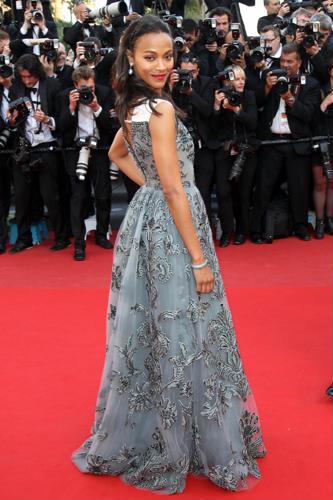 Some of the most scene-stealing looks at the Chime for Change event came from the Gucci collection, as Blake Lively and Zoe Saldana proved this weekend. The two looked like yin and yang on the red carpet - Saldana wore a dark leather ensemble with a tropical print short-sleeve Gucci jacket, black leather pants and an eye-catching oversize cuff bracelet. The unique accessory, as well as her ring and earrings, were all coveted pieces from the Repossi collection, a favorite among celebrity starlets.

The beautiful actress has climbed her way to some well-respected roles, including "Avatar," the latest "Star Trek" and the upcoming "Blood Ties," which made quite a buzz at the Cannes Film Festival. While she certainly looks amazing on film, she's been eyeing a different role for herself lately: director.

"[Directing] is much more satisfying," Saldana told inSing.com. "You are more of a participant in the conception and making of a story, of a movie, as opposed to being an actor that's hired and show up and says your lines. ... As soon as you leave you are at everybody's mercy and that is too much of a loss of control for me, of my craft."

Saldana naturally commands attention on the red carpet, so it's no surprise that she's yearning for something greater in her career life as well. The dramatic gold cuff she wore is a great way to show off fearless style, especially when paired with leather pieces - for summer, you can try pairing a strong cuff like the Goldtone Metal Wide Cuff Lattice Bracelet with leather shorts, or even a chic leather T-shirt in a pastel hue to maintain that light, summery feel. Before you know it, you might even receive that promotion you've been waiting for, just like Saldana!