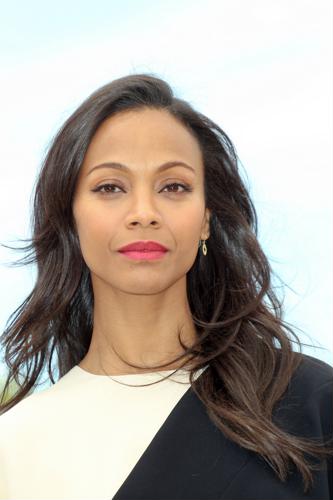 Sometimes all you need is a tiny touch of bling to make an already spectacular outfit just a little bit better. Zoe Saldana is one of those people who has a natural knack for style, and as she's been promoting films lately, her fashion sense has been on full display.

Though sometimes she adds the glam with dramatic necklaces, jeweled headpieces and dazzling earrings, other times, simple gold bands on her fingers and a thin chain anklet are all she needs to accessorize a beautiful and chic ensemble. She visited the Today Show this week wearing a Jason Wu black sheer striped top and grey lace pants, with Alexander McQueen shoes and her dainty gold jewelry pieces. Maybe it's her ballerina physique, but it seems like fashion pieces just naturally look flawless on Saldana, no matter who the designer is.

She recently created waves in the image-obsessed Hollywood world with her Allure cover story. Under her name, the headline stated, "115 Pounds of Grit and Heartache." Though a celebrity's weight is a hot topic in the film industry, it's typically never revealed to the public, out of respect to the actress.

"It would have been wrong if they were lying [about the weight] ... I've always been a very thin frame," Saldana told the "Today" show. "They wanted to do that, I don't think it was to make an issue of my weight. I think it was to talk about that for a lightweight person, I seem to be really strong-minded."

Anyone can learn a confidence or style tip from Saldana, such as when to keep the accessories simple. Tasteful gold jewelry is a wise option for office wear, so stock up on pieces like the Gold-Plated Hammered-Style Band, and for the summer, get yourself an anklet like Saldana: The Yellow Gold Over Sterling Silver Triple-Strand Beaded Ankle Bracelet is a simple and pretty piece.